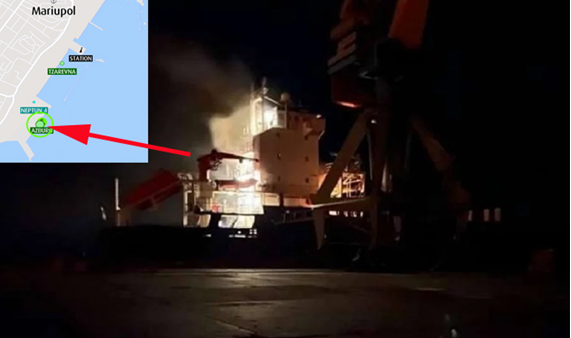 The vessel was struck by two missile shells while at berth in the port of Mariupol, Ukraine on 3rd of April 2022 at 11:36 UTC. On 4th April 2022, around 22:40 LT the vessel was heavily fired upon by Russian armed forces after intentionally shelling the vessel twice a day earlier. Specific characteristics of firing on the vessel remain unknown, crew reported shelling, bombing and repeated hits by missiles, causing a fire in engine room. Further reports of heavy fighting and intensive shelling in the port area by Russian armed forces were received by the Administration

On 4th April 2022, the Commonwealth of Dominica Maritime Administration received information that as a result of the attack and spreading fire, m.v. AZBURG sank at berth 16 in the port of Mariupol Port, Ukraine.

The crew managed to evacuate and found refuge on board of neighboring vessels. One person was found wounded and received medical assistance. The crew currently remains under an immense amount of fear and stress and needs to be evacuated to a safe area immediately.

No further information is available, communication with people in the area is very difficult.

The Commonwealth of Dominica Maritime Administration urges the Russian Federation to withdraw its forces from Ukraine and respect its obligations under relevant international treaties and conventions. The immediate evacuation of all civilians from the port of Mariupol, including the entire crew of mv Azburg, should be organized with the highest degree of priority and urgency.

The Commonwealth of Dominica Maritime Administration furthermore wishes to emphatically point out the current risks the crew and the environment is facing. People are facing the risk and reality of loss of life and/or serious injury and are likely to be deeply traumatized by the current events. On top of that, current events are seriously damaging the marine environment. Normal safety requirements and (port) emergency response plans are currently not fully operational or completely absent. Medical emergencies, firefighting operations, oil spill response, abandon ship and safe navigation is currently not sufficient or not possible at all.

We urgently call upon all relevant UN, governmental and industry bodies to take immediate and direct action to address this serious issue for health and wellbeing of humans, the safety and security of shipping and the prevention of marine and atmospheric pollution by ships.

All efforts to speed up establishing humanitarian corridors, as decided upon during the thirty-fifth extraordinary session of the Council, should be taken and executed with the highest degree of priority and urgency. Resulting in enabling the safety of seafarers by allowing them to leave the conflict zone immediately.